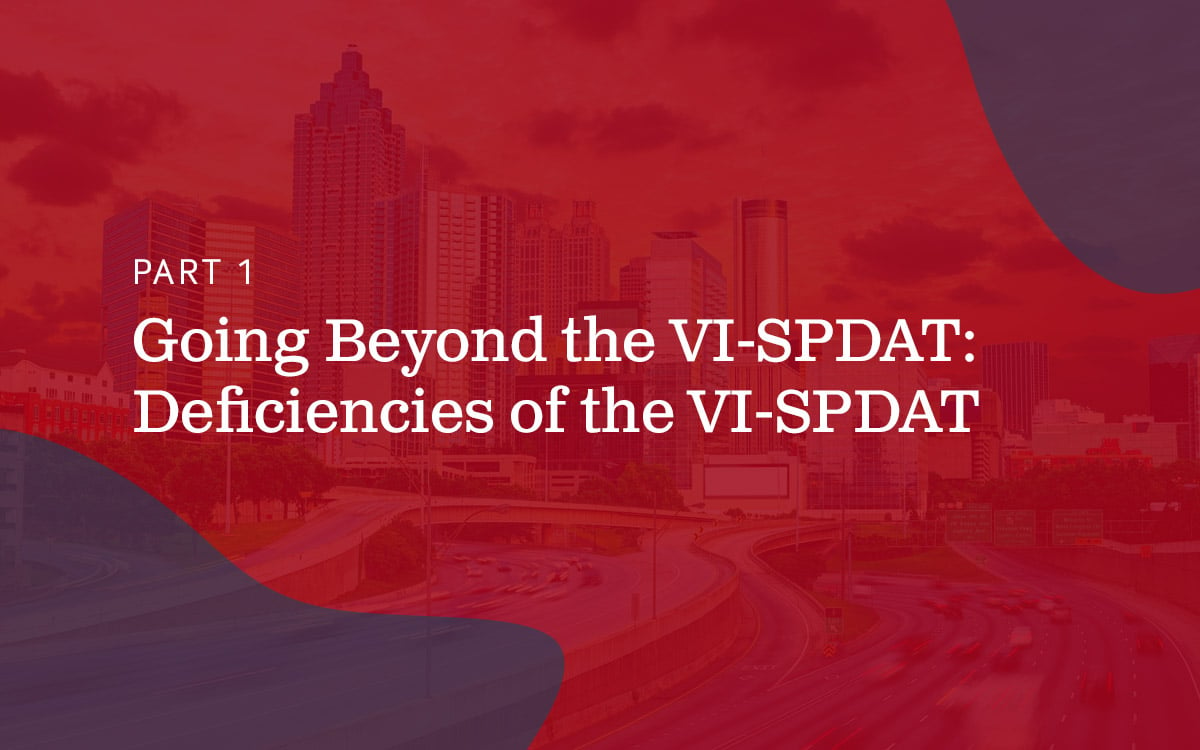 In late 2020, OrgCode announced that it would be phasing out the VI-SPDAT. Over time, the prominent usage of the VI-SPDAT as an assessment tool has been debated. Is it helping communities accomplish their goals? Is it an effective assessment tool? This four-part blog series will discuss the circumstances surrounding the decision to phase out the VI-SPDAT and what it looks like to go above and beyond this tool. We’ll look at some of the communities that have already done this and provide suggestions on how you can build a more reliable and fair custom assessment for your community.

In 2014, OrgCode released the VI-SPDAT, the product of a combined effort between OrgCode and Community Solutions. The VI-SPDAT contains a mix of elements of the Vulnerability Index (VI) from Community Solutions and the Service Prioritization Decision Assistance Tool (SPDAT) by OrgCode. Iain De Jong of OrgCode writes that they created this tool “to assist with identifying the 'most vulnerable' to be served first.” The original intention of the VI-SPDAT was that it would be a triage tool to help community providers assess the immediate needs of people experiencing homelessness, with the full SPDAT being used in partnership with it. According to The Vulnerability of Assessments, “The creators recommend using the VI-SPDAT together with the SPDAT, comparing the VI-SPDAT to a hospital triage assessment, and the SPDAT to what happens when you actually see the doctor.”

Triage tools look at immediate needs that require urgent attention, while an assessment will help you strategize to meet goals over a longer period.

An excessive focus on triage keeps you stuck in the present. Though a crucial aspect of any work, a "focus-only-on-the-now" mentality can't be the whole show if you want to see real, lasting change. A true assessment will help you to focus on meeting longer-term goals for your clients and community.

The VI-SPDAT is more of a triage tool than an assessment tool, so while it may help you identify a client's most urgent current needs, it will be less effective at determining how to best help them now and in the future.

The creators of the VI-SPDAT did not design it to be used as an in-depth assessment or intend it to be taken by the same person multiple times. But over time, both use-cases have become commonplace—sometimes to the detriment of the people it's supposed to help. And on a broader scale, data from VI-SPDAT results alone are not sufficient to help communities implement effective long-term strategies.

Despite its widespread use, there are downsides to using the VI-SPDAT. We highlight the most critical ones below.

When it comes to assisting domestic and sexual violence victims, the VI-SPDAT doesn’t include much in terms of assessment of any real current or future danger for intimate partner violence (IPV) or sexual violence (SV) victims. Nor does it look at the aftereffects of escaping a violent situation, such as work absence or broken leases from a history of multiple moves to name two, that may come as a result of being an IPV or SV victim.

A study entitled Assessing Vulnerability, Prioritizing Risk: The Limitations of the VI-SPDAT for Survivors of Domestic & Sexual Violence states, “[i]ndeed, the VI-SPDAT does not specifically address unique risk factors for homelessness experienced by survivors (e.g. the need for multiple moves, lost time from work), which may limit the utility of the VI-SPDAT for survivors.”

According to 2018 data from the National Alliance to End Homelessness (NAEH), Black/African-American people are disproportionately living in poverty and homelessness. This group, representing 13% of the general population, comprises 23% of those in poverty and 40% of the homeless population.

A 2019 study looked at the racial disparities within the VI-SPDAT scoring and found that, in general, people who are black, indigenous, and people of color (BIPOC) receive lower prioritization scores than white individuals, even though BIPOC are disproportionately represented in the population of individuals experiencing homelessness. In practice, white people are more likely than BIPOC to confirm they experienced vulnerabilities favored by the subscales.

“Race is a predictor of 11/16 subscales,” according to the study, “and most subscales are tilted towards capturing vulnerabilities that Whites are more likely to endorse.”

What does this mean? It means that white people often get help faster than BIPOC.

White individuals score higher, leading to permanent supportive housing, while BIPOC individuals tend to score lower, leading to rapid re-housing or no housing intervention at all. The same tendency holds for families, though less so.

It’s hard for a person to answer sensitive questions on any assessment, especially when the individual conducting it is essentially a stranger. Ideally, there would be some degree of trust established between the interviewer and client before the completion of an assessment. The VI-SPDAT contains questions about physical and mental health struggles, substance abuse issues, and more. Due to this sensitive subject matter, respondents may answer in a way that minimizes the severity of their situation. This can be exacerbated by cultural or language barriers, or even the privacy of the assessment location, whether it’s over the phone or in person.

The VI-SPDAT is certainly not intended to perpetuate racial inequities or overlook domestic or sexual abuse, so what are some of the reasons this could be happening? The root of the problem lies in the assessment questions themselves.

One example is found in the section of questions related to substance use:

“Single, adult people of color are 62% less likely than whites to say that substance use led them to be kicked out of housing, or that they would expect substance use to be an issue with maintaining housing,” the Seattle Times wrote in assessing a C4 Innovations report on Racial Equity Analysis. “For people who already experience discrimination in other areas of life, these questions could be interpreted as ways to disqualify a person for housing, according to C4, rather than prioritize them based on need.”

It’s imperative to ask the right questions, to be sure. Still, beyond that, it’s important to consider whether we’re asking questions in a way that will translate the same meaning across different cultural groups. Consider what people from various backgrounds might take the question to mean. Sometimes a slight adjustment in question phrasing or a better explanation of what’s being asked will make a large difference.

Intentional or not, the VI-SPDAT leaves room for personal bias on the part of both the interviewer and the client because most of the answers are self-reported. Though the VI-SPDAT was not designed to be taken multiple times, it happens in many communities. According to a study cited in Assessing Vulnerability, Prioritizing Risk, scoring accuracy is compromised in places where the VI-SPDAT is given to clients more than once.

The authors note that the VI-SPDAT “had poor test-retest reliability, with most participants scoring higher on subsequent administrations, and poor interrater reliability, which suggested there was variation in scoring across interviewers and sites.”

When OrgCode announced in late 2020 that the VI-SPDAT should be phased out, they shared some of their reasoning behind this recommendation and described what a better assessment should entail.

According to OrgCode, they designed the VI-SPDAT as a triage tool to get an idea of any immediate crisis the client may be experiencing, but it wasn’t intended to be used as a comprehensive assessment. They recommend that communities use a more thorough assessment that includes specific considerations for racial and other equity and is also trauma-informed. A good questionnaire would focus more on empowering clients long-term and would factor in particular contexts like local goals and demographic makeup.

Where does this leave us now? It leaves us knowing that we need to develop new and better assessment tools. Unfortunately, there haven’t been many studies covering the effectiveness of the VI-SPDAT. Nor is there much information available about better alternatives. One certain thing is that, for an assessment to be more effective, it needs to be rooted in the specific context of the local community.

So there are still lots of unanswered questions, and much we need to learn. But there are some good examples to which we can look. In the next blog, we’ll discuss how one CoC went about developing their own assessment — and what the results have been.

Going Beyond the VI-SPDAT: Rolling Out a New Assessment

Going Beyond the VI-SPDAT: Developing a New Assessment