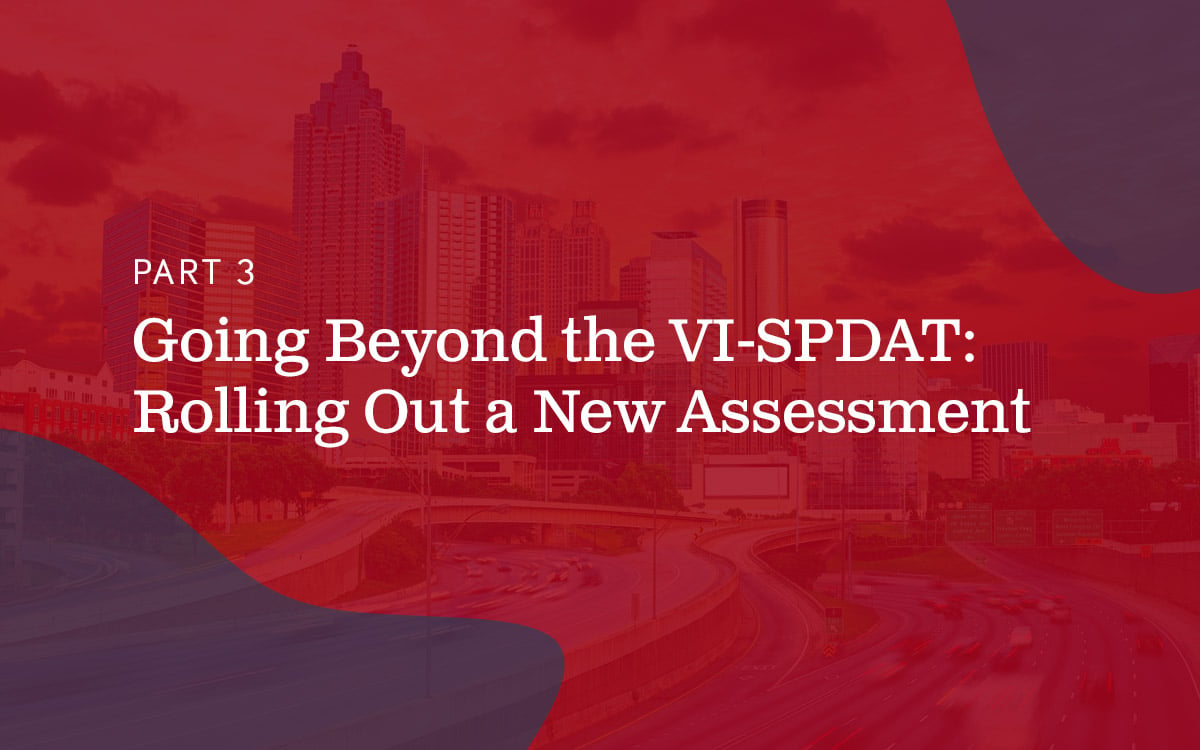 Going Beyond the VI-SPDAT: Rolling Out a New Assessment

In late 2020, OrgCode announced that it would be phasing out the VI-SPDAT. Over time, the prominent usage of the VI-SPDAT as an assessment tool has been debated. Is it helping communities accomplish their goals? Is it an effective assessment tool? This four-part blog series will discuss the circumstances surrounding the decision to phase out the VI-SPDAT and what it looks like to go above and beyond this tool. In Part 2, we talked about the factors that led Southern Nevada to create their own assessment (the CHAT). In Part 3, we’ll look at Southern Nevada’s process and discuss the results of their innovative custom assessment.

Testing: Is This New Assessment Ready?

Before Southern Nevada could complete a large-scale rollout of their new assessment (the CHAT), it was crucial to test it. Once the assessment team believed the CHAT had gotten to a relatively solid place, the testing phase began.

There were two testing stages. First, the team simulated a series of client run-throughs based on how real, well-known clients would score. The care providers on the assessment team made these tests possible. They understood their clients and could accurately guess how they would answer questions. Once this phase was complete, they moved on to the second stage, consisting of a test group of actual clients who had agreed to take the assessment. This testing phase gave the team an idea of how the scoring worked in practice.

According to the team, the biggest obstacle was determining when to release the new tool. They eventually realized there was only so much they could learn before introducing it to the population. To the team’s credit, there have been no major changes made to the tool since the rollout.

The release of the CHAT came with an immediate rollout and harsh cutoff deadline. Southern Nevada communicated in advance with their users to let them know about the upcoming assessment change. The VI-SPDAT was disabled in the system on the same day they released the CHAT, which then became the only available assessment.

The VI-SPDAT was out and the CHAT was in. However, people had to be trained to use it before they were granted access. The system administrator only made CHAT accessible for staff who had completed training for conducting the new assessment. In addition to training, the Southern Nevada users also had to reassess everyone who was already on the coordinated entry waitlist, known as the Community Queue in Clarity Human Services. Though reassessing all of their existing clients was a large project, it gave users an opportunity to clean up the Community Queue. They could confirm that everyone on the list needed to be there while reprioritizing clients based on the new assessment.

The community could have balked at the idea of reassessing everyone on the queue—but that wasn’t the case. The community generally embraced the CHAT assessment because they created it together.

Having oversight from their HUD Technical Advisor (TA) helped Southern Nevada in the rollout process. The TA provided third-party, objective oversight throughout the duration of the project. Providers knew their opinions mattered and appreciated the work of a facilitator who cared about them and the outcome of this new tool.

Even though the transition to a custom tool was a painstakingly long process, the effort paid off in the long run. The hard work restored a semblance of control to the community providers that had been missing since the introduction of the coordinated entry process and the VI-SPDAT. The CHAT addressed Southern Nevada’s specific needs more than the VI-SPDAT ever had.

Southern Nevada has not had to make any major changes to the CHAT since its introduction. The team credits this success to their rigorous testing in advance of the rollout and the continued assessment of some specific performance measure outcomes, such as the rate of stay in PSH, after release. Their HUD TA was impressed by the in-depth involvement and contributions of the leadership and system administrators throughout this process. The TA conducted a thorough gaps analysis that was presented to the board at large within the community. It included analysis of the CHAT assessment, which they found to be an effective tool.

“[A project of this magnitude] requires the work of everybody involved. There's no room for slackers, so everybody that's involved in this has to be committed to making the time to be at the meetings and doing the associated work. If they're not committed, they shouldn't be part of the working group.

I would not do it without a HUD TA. I would definitely have a technical advisor to help out in the process. I would never advise anyone to do it without provider buy-in. And I would tell someone to not expect it to be quick or easy. Put in the time or it won’t be a good product. [It was] extremely painful and extremely worth it in the end.” — Tauri Royce, Vice President of Customer Experience at Bitfocus.

“We were really fortunate that everybody who participated in this, from development and rollout, to stakeholders, and to the providers who we're going to have to be reassessing people — everybody was so absolutely involved.”  — Julee King, Senior Project Administrator for the State of Nevada HMIS.

Coming up in the fourth and final part of this series, we’ll dive into how you can create your own custom assessment in Clarity Human Services. And we will summarize the series as a whole, including the steps Southern Nevada took in creating a new assessment tool from parts 2 and 3 of this series. Stay tuned!