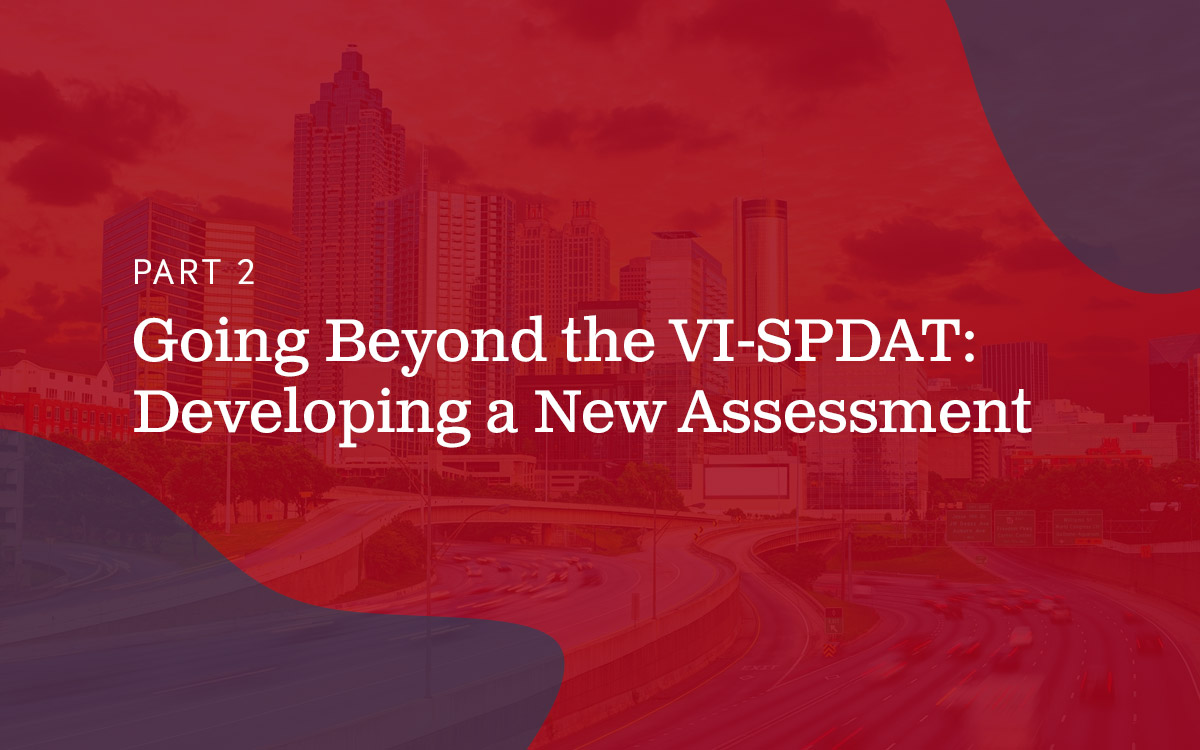 Going Beyond the VI-SPDAT: Developing a New Assessment

In late 2020, OrgCode announced that it would be phasing out the VI-SPDAT. Over time, the prominent usage of the VI-SPDAT as an assessment tool has been debated. Is it helping communities accomplish their goals? Is it an effective assessment tool? This four-part blog series will discuss the circumstances surrounding the decision to phase out the VI-SPDAT and what it looks like to go above and beyond this tool. In Part 1, we talked about the primary deficiencies of the VI-SPDAT. In this post, we’ll review Southern Nevada — their journey to realizing the VI-SPDAT would not work for them and the steps they took to create an assessment of their own, by their community for their community.

With the introduction of coordinated entry into homeless services, communities were quick to adopt the newly created VI-SPDAT and use it as their primary assessment tool — and understandably so. Communities were tasked with implementing coordinated entry systems for the first time, which switched up the prioritization methods they had previously been using.

This was a huge shift in both operations and mindset. By using the VI-SPDAT as their assessment tool, these communities had one less large-scale project to worry about. It may not have been perfect, but it was good enough to get by for the time being with everything else they had to do.

Southern Nevada’s Problems with the VI-SPDAT

Like most CoCs, Southern Nevada started using the VI-SPDAT as their coordinated entry assessment tool from the start. However, they quickly realized it did not account for more localized risk factors, specific to Las Vegas and the state of Nevada, that people experiencing homelessness or in danger of becoming homeless were facing.

In particular, they needed to address heat and gambling, two crucial, regional issues. There was also a unique synthetic drug in the state that was increasingly becoming a problem. The CoC aspired to have a tool that was more catered to Nevada, the driving force behind their search for a new assessment creation process.

They also wanted an assessment where their custom fields could be factored in with the scoring. Yes, they had the option to add custom questions to the VI-SPDAT, but they could not score them at the time. This functionality is now available in Clarity Human Services, however. Another issue was that the VI-SPDAT contained some topics that would never be relevant to their clients but were still required to be answered, such as questions about extreme cold.

The other problem was the sense of control that using the VI-SPDAT took away from local providers. Not all of the data they needed was being captured, and the weighting of the scoring didn’t match what they felt were their communities’ needs.

Providers, who have invaluable insights into what the clients are dealing with, were concerned about their clients getting really unexpected score results, and people they would normally prioritize getting housed were instead falling to the bottom of the list. They couldn’t change the weighting system.

Implementing a coordinated entry system and the VI-SPDAT was hard on local providers because it hindered them from factoring in local community needs. They had been used to one way of prioritizing clients, which changed. That’s not necessarily a bad thing in and of itself, but creating a new, community-led assessment would bring a sense of control back to the community providers.

To summarize, Southern Nevada had two key problems with the VI-SPDAT:

In response to their concerns with the VI-SPDAT, Southern Nevada began the process of assembling a team who would work together to develop a new assessment. The team was comprised of the following:

Even with a solid team of local provider volunteers, the team was not complete without bringing in a HUD TA. According to those involved in the project, it was crucial for them to have an unbiased third party for oversight and objectivity. It’s easy for provider emotions to run high, and it’s easy to get bogged down by details and lose focus of the overall goal. For these reasons, Southern Nevada recommends creating a custom assessment with a HUD TA to help provide insight into the bigger picture and keep the project moving forward.

One activity the HUD TA led during planning was a visual exercise. Around the meeting room were large headings for different priorities. The providers were able to put post-it notes under the priorities that mattered the most to them and their respective agencies. This helped provide a visual representation of the CoC’s greatest priorities, rather than exclusively present agency-specific perspectives.

In the beginning, the assessment team started by having four-hour meetings each week for the first couple of months. Then, they switched to two-hour meetings every two weeks. They not only had to figure out what questions to ask, but also how to weigh those questions and how the weight would impact scoring and prioritization.

From start to finish, the project took approximately two years to complete.

The Southern Nevada Community Housing Assessment Tool (CHAT) was released in fall 2017, and there were subsequent alternative versions released after that during 2018.

Here are the assessment tools Southern Nevada developed and their respective purposes:

Southern Nevada, Community Housing Assessment Tool (CHAT) (2017) — This is the standard housing needs assessment for single adults and the direct replacement for the usage of the VI-SPDAT. Other variations are the Family CHAT and the Southern Nevada Youth Assessment, both of which were released in 2018.

Short Assessment Triage Tool (SATT) — This is the crisis needs assessment. It tells the user conducting the SATT which assessment should be completed for the client and also what the user should do next. The SATT also ensures that the client at hand is homeless, which was something Nevada needed to verify as they had been having non-homeless people showing up on their coordinated entry waitlist. The SATT helps keep the waitlist accurate and assists Southern Nevada with providing clients services to prevent them from becoming homeless, rather than sending them to the waitlist.

This tool removes the question for the assessor of “what is the next step?”

It tells the user: 1. Which coordinated entry assessment to complete, and 2. Immediate next steps, based on client responses. Depending on the situation, they may receive an alert that says, “Stop, call 911 or call the police;” or “This is a veteran, refer to the VA;” or “This is a DV client, refer to a DV provider,” and so on. The SATT also has a box for the assessor to document the next steps that were completed. Clarity Human Services has this as a required field to ensure that documentation is recorded at each step of the process.

One of the more time-consuming parts of the process was developing the scoring equivalencies across the different assessments. The Youth Assessment is shorter than the CHAT, for instance, so the total score possible was different for each. Someone could score a 50 on the CHAT, and then someone on the Youth Assessment might score a 12. How do the 50 and 12 measure up in terms of equivalent prioritization? It couldn’t just be based on score alone. Southern Nevada had to figure out a way to match up the levels, so they created a percentile system to develop equivalencies across the different assessments. While they have it in good working order, this element of scoring equivalencies is still a topic of ongoing discussion among providers.

Southern Nevada’s case represents an effective approach to the VI-SPDAT. They recognized its shortcomings and built a team to develop a solution that better served their communities.

In the next post, we’ll look over the testing period and rollout of the assessment, as well as the communitywide response to the new tool. Stay tuned!